Boy, it’s been a while since I posted anything here! It’s nice to be back and now it’s time for some late posts galore starting off with dun dunununnn… G.I. Joe Retaliation! I just gotta say first that I really loved G.I. Joe: The Rise of Cobra because of Rachel Nichols. I didn’t know anything about her before that film and after I saw it I just had a massive crush on her since then. Gorgeous to the 10th degree. She’s got nothing to do with this movie nor this red carpet premiere, I just thought I’d give her a special mention. I love you, Rachel Nichols!

Okay, back to Retaliation. Bruce Willis. He’s one of my super idols in the world, other than that, he’s my dream dad. I wish he was my dad because he just has this Bruce Willis look. I think I just described him using his own name. I dunno, I just can’t explain this but he’s got this certain coolness and machismo, he’s badass yet lovable, with a leader and protector don’t-mess-with-my-children-or-you’re-dead kind of appeal. Well, I’m not Rumer to say if the last one is true but I just think that’s how it would feel like based on this Bruce Willis look.

And now… I finally get to meet him! YIPPIE-KI-YAY!!!

He recognized me, parted the crowd and said, “son?” He the then hugged me and with tears in his eyes, he said, “we will never be parted again!”

…is how it happened in my fantasy. In real life he just went on signing autographs, getting farther and farther away as the seconds go by. Here he is with his wife, Emma Heming. 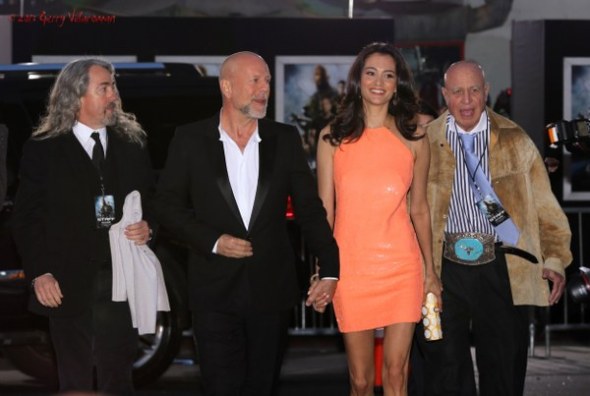 You rock, Bruce! And speaking of rocking, The Rock is here too (that’s the best segue I can think of, that’s why I’m not a journalist!). Notice the brahma bull belt that guy is wearing above? Pretty cool, huh?

Dwayne “The Rock” Johnson. He’s owning the entertainment world in the first half of 2013! He’s got this, Pain and Gain, Fast & Furious 6, plus Wrestlemania 29 all just several weeks apart from each other. He’s even got a hernia repair! That too is special! I just adore this man. A natural athlete and arguably the most charismatic wrestler in WWE history. This man can talk the talk and walk the walk! He made the Attitude Era the most memorable of all, along with Stone Cold Steve Austin, Degeneration X, The Undertaker, Mankind, and many others. Ahh. Those were the days! I’ve been an avid fan of the WWE since I was a child and I believe him when he says he is the most electrifying man in sports entertainment. I also smell what The Rock is cookin’. It smells like bacon.

He’s even electrifying when he’s signing autographs! His energy was so high it sent chills down my spine. The only other man I saw on a red carpet premiere with this much energy… Terry Crews from the Expendables 2 premiere.

Two of my idols in one event. What a day! One of the best ones I’ve attended! I’m sorry to Channing Tatum fans, he wasn’t able to make it in this event. If you want to see Channing, please check out Magic Mike Red Carpet Premiere.

Here are some more photos, starting off with no other than Bruce Willis‘ daughter, Rumer Willis.

Adrianne Palicki waving to the crowd… 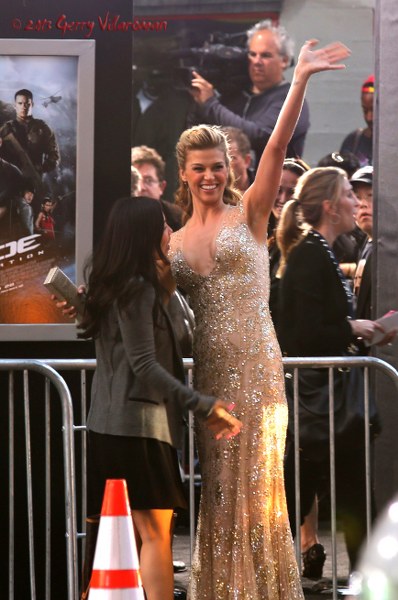 Here’s a jam packed Hollywood sidewalk. Yep, it gets crazy! 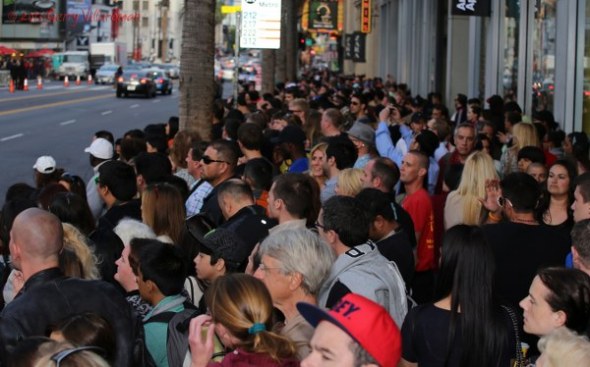 Byung-hun Lee, who plays Storm Shadow in the film.

…and I would like to thank that camera man for providing a fill flash on his face. Without you, this shot wouldn’t be possible.

It’s The Expendables 2 Red Carpet Premiere! The toughest men in Hollywood are gonna be here! We’re all pumped up!!!

The premiere has been delayed a couple of days due to the passing of Stallone’s son, Sage. Rest in Peace, brother.

And now we’re here, ready to witness the macho men of the big screen all in one event, live and in person. I grew up watching some of these men on Betamax, then on VHS, then on VCD, then on DVD, now we have Blu-Ray, and they’re still kings. The symbols of male machismo. The gods of Hollywood action films. Today, we see these gods walk right in front ouf our very eyes.

The crowd is piling up. More and more people arrive by the minute. Hollywood Blvd is gonna be packed in a little while. The street is closed to the traffic, maybe just coz Chuck Norris wants it to be. Hmm wait… that girl looks familiar… isn’t that… Catwoman?! Wow even superheroes can’t wait to see them! 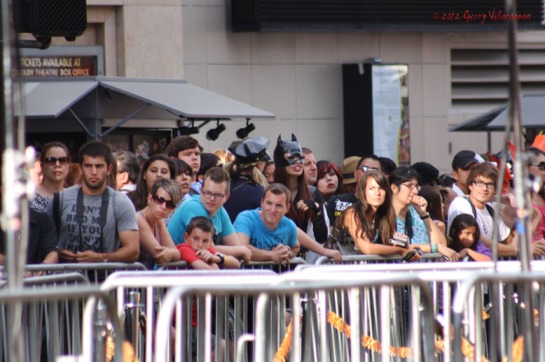 I see the billboard up on the wall and wow! It’s actually the first time I see this version. I only keep seeing the other one but this… THIS is definitely way cooler. The Last Supper theme, very clever.

Get your posters and sharpies ready folks! They’ll be here in a minute…

The big badass black cars are starting to arrive…

Okay I dunno any of them (you probably do!). But that’s usually the case, the unknowns arrive first, then the little known, then the minor cast, then the stars of the film. It’s kind of like a rising tension that builds to the climactic moment.

First familiar face of the day, Extra’s Mario Lopez! He’ll be doing some interviews for his show today…

And there’s Olympic swimmers Ryan Lochte and Conor Dwyer! This is so unexpected! There are not only action heroes here, but Olympic heroes as well! Congratulations for the achievements you’ve made this past summer guys! 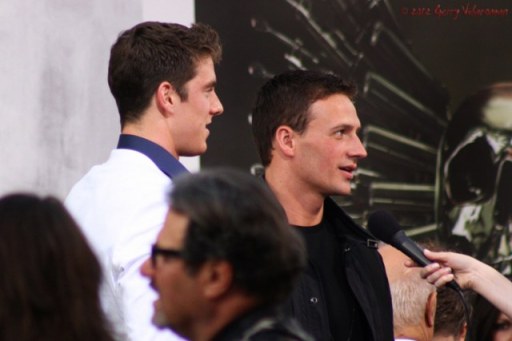 The place is now roaring! Somebody big has arrived! BIG, both literally and figuratively… it’s Terry Crews! Man! The guy’s full of energy! He blasts to the scene screaming, waving his arms up telling everyone to get wild. And so we do!!! 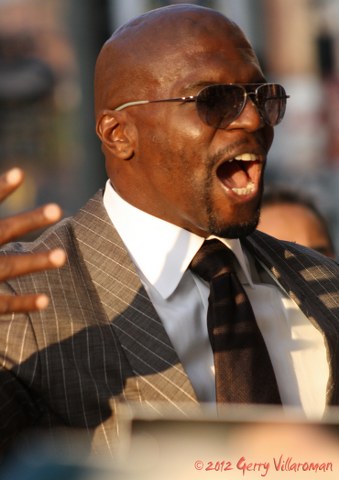 Terry Crews sure is one of the coolest guys in Hollywood.

And then there’s Charisma Carpenter, she plays the girlfriend of Jason Statham’s character on the film.

Next comes IVAN DRAGO!!! Mr. Dolph Lundgren! Okay he’s played a lot of other characters throughout the years but he’ll always be Drago to me. That training montage scene on Rocky 4?! EPIC. By the way, he’s from Sweden. Jag älskar Sverige!

The Stallone Family is now here, supporting Sly. Jean-Claude Van Damme has also arrived. The guys meet and give each other a big warm hug. Of course in the film, Van Damme is the main antagonist so don’t expect any hugging there. 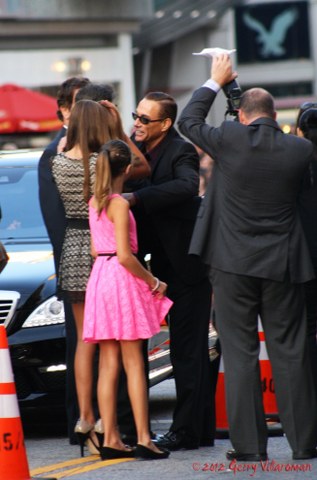 Van Damme is now walking towards us. Hope he doesn’t give anyone a flying kick! 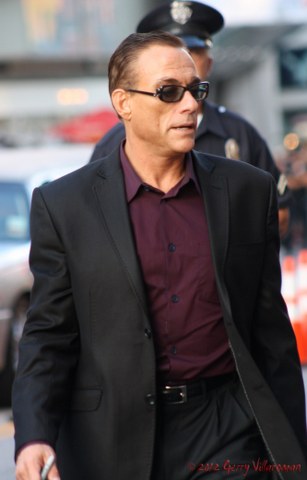 Everything seems to be going fine at this point, and then it happens. The earth shakes, a loud deafening sound is heard, people scatter on all directions running for their lives. HOLY SMOKES!!! It’s CHUCK NORRIS! It’s CHUCK NORRIS!!! IT”S CHUCK NORRIISSSS!!!!

Nah. None of that happens. He arrives peacefully and proceeds to sign autographs. 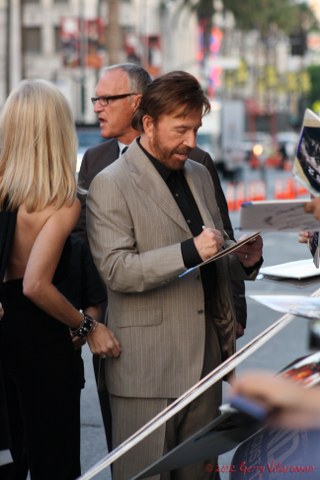 Okay while he is signing, some Chuck Norris facts. Yay!

Okay enough. There’s a whole website dedicated to that, check it out! http://www.chucknorrisfacts.com/ FYI, it’s all 100% real haha.

Chuck’s done signing and look there’s an SUV heading the opposite way, I suddenly hear screams “ARNOLD!!!” I saw his hands waving from the window, but that was it. I didn’t get a photo! Well, I got a photo of the vehicle at least. 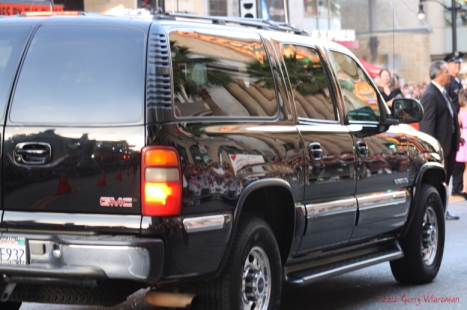 I’m gonna wait for him to walk by to our spot so I can see him better, but I’ll learn later on that he won’t be heading our way.

I got a picture from afar, a badly blurred one. Ugh.

There’s a buzz that Bruce Willis will not be coming, which will prove to be right. They say he’s abroad or something. That’s okay, he has a movie coming soon and I hope to see him there. It’s called Looper, with Joseph Gordon-Levitt.

***CLICK HERE TO WATCH THE OFFICIAL TRAILER OF “LOOPER”*** 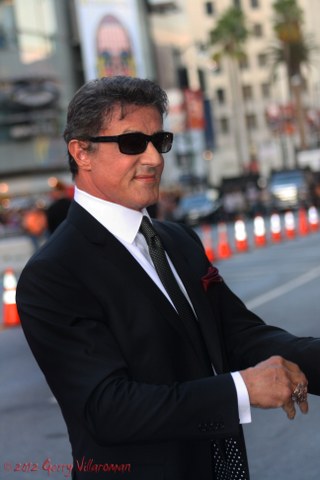 The whole family walks by with him while he’s signing, with some people asking for pictures with the members of the family too, especially Frank Stallone who also is an actor. 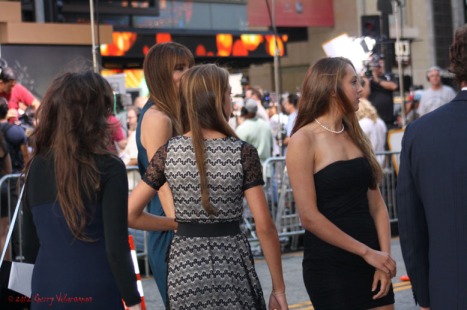 Jason Statham time is now! The guy’s smiling the whole time and signing autographs for a lot of people! He’s definitely in a good mood!

Okay last but not the least. I’m a big UFC fan so I gotta introduce him the UFC way, the Bruce Buffer way! Ahem… 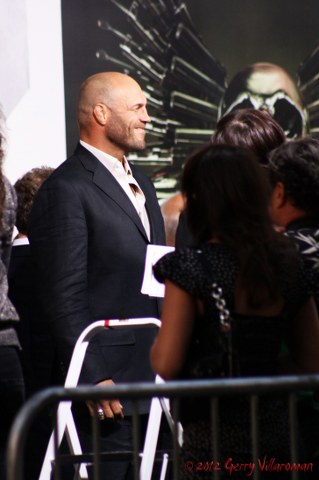 And there ya go. I hope you enjoyed this red carpet moment with me. Please don’t forget to watch The Expendables 2!

I’ll see you again soon at the red carpet!