Scarlett Johansson Receives a Star at the Hollywood Walk of Fame 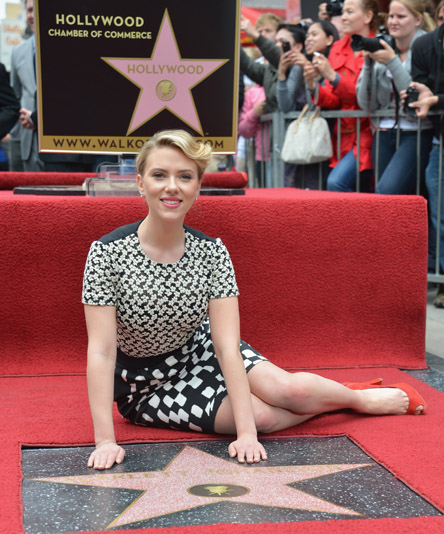 One of the most exciting days of my life, seeing Scarlett Johansson upclose and personal as she receives the 2,470th Star on the Walk of Fame in Hollywood Blvd.

I arrived there around 8:00 am and there were already quite a few people waiting. It was drizzling, looked like it wasn’t gonna be the best day for doing a star ceremony. I saw the men working on the star, which was located right in front of Madame Tussauds.

Thankfully, the drizzle stopped. After the workers finished with the star, they started putting up the stage and the railings for the event. These guys seem to have been doing it for the longest time coz they’re very good at it, finishing in just a few minutes. We were then all allowed to finally pick our spots. It was still pretty early so we spent the time chit chatting with one another, doing whatever things that could put us away from boredom. Scarlett’s a very special lady, and none of us really minded waiting for her even if it took several hours. Even Captain America was willing to stand in there for a long time.

He sacrificed the safety of America just to see  Scarlett.  He also ate a little too many cheeseburgers while waiting.

The paparazzi arrived and the tension built. We’re SO ready to finally see our favorite Hollywood girl! 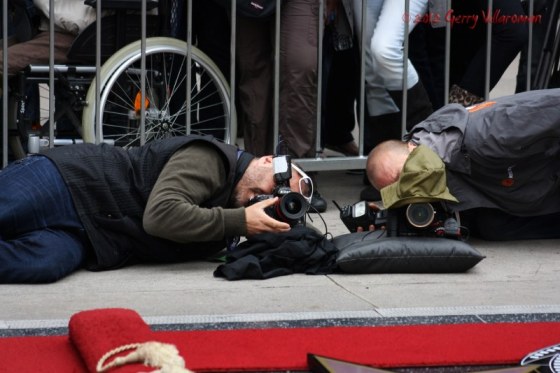 Uhm guys, don’t you think you’re setting up the camera a little too low? Upskirt shots are supposed to be done discretely, you know.

And after much anticipation, Scarlett arrived,  she was very stunning, Like a goddess walking amongst men! 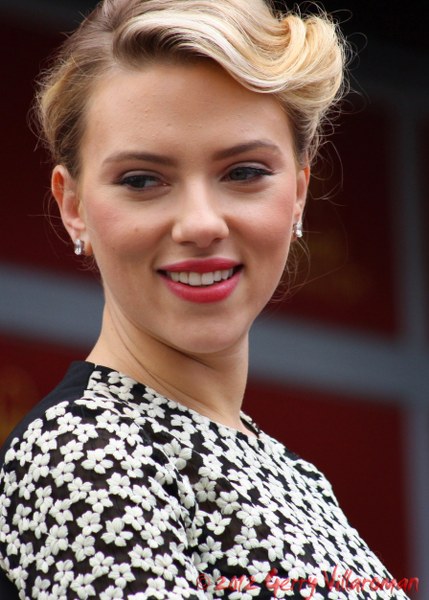 The ceremony started at 11:30. The day looked so beautiful, so much different from how it looked just a while ago. It’s the Scarlett Effect. Leron Gubler of the Hollywood Chamber of Commerce stepped up on stage to introduce Scarlett.

While he’s doing this, I fainted coz her beauty was way too much for me to handle. The ceremony was halted for a bit as there was a need to call for paramedics. Oops, sorry for the scene. Scarlett approached the mike and said there was no need for one, then she ran towards me, knelt and gave me mouth-to-mouth resuscitation.

And then I woke up. Gosh.

Her guest speaker was Jeremy Renner, who co-starred with her in The Avengers, together with Robert Downey, Jr., Samuel L. Jackson, Chris Evans, Chris Hemsworth, and Mark Ruffalo. If you still haven’t watched it by now, I feel sorry for you!

Here’s the full speech recorded by a buddy of mine. He made us laugh!

It was really cute when they locked eyes…

They had a big warm hug after his speech.

Then Scarlett got off the stage to hug me too. Not.

Yep, it’s on an index card. Don’t throw that away Scarlett,  we’re gonna auction that haha!

And here’s the speech in full:

Two things that really caught my eye as she was giving her speech:

1. Her wrist tattoo. I thought it was a crucifix from afar but it wasn’t… what is it?!

After the speech, she was given this certificate from the city of Los Angeles, declaring this day as Scarlett Johansson Day in Hollywood! 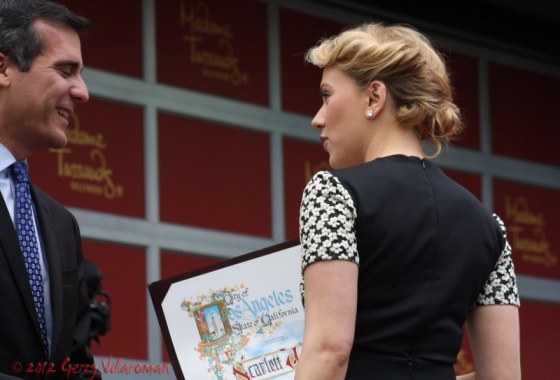 The new walk of fame star is finally revealed!!! Woohoo!  Well, I saw it this morning already, but this time, it’s official! Wohoo!

I saw another tattoo in her forearm, it’s a colorful one, looked to me like a sunrise scene…

It was a really great day! Congratulations to Scarlett and hoping to see more of you on the big screen!!!